There is just something about fridays that makes these kids go crazy, its almost as if they have been saving up all their crazies for the whole week and then just go nuts on friday. Unfortunately this friday was no exception. It started out with me getting about 4 hours of sleep because i stayed up late goofing off with the other bigs and then i had to get up early to do my breakfast shift. At breakfast Pierre comes over to the kitchen 15 mins late (we only have 30 mins for each meal and we have last call after 10 mins for breakfast) and i had already put the food away and he starts demanding something to eat. He throws a fit and gets all crazy and starts banging his head against stuff, so i have to restrain him instead of doing my kitchen duties. I get done with breakfast clean up around 9am (started at 6:15 am) and then take a kid to the doctors for a follow up appointment. Thankfully this was the one part of my day that went off without a hitch which was surprising because two day earlier this same kid broke a window with a rock and cut himself with the glass and had to restrained for over an hour and has spent the last two nights in the isolation room. I get back from the doctors appointment and go to lunch where i find Pierre continuing to act a fool and not sit down. I told him none of the guys are going to eat until you take a seat and it took him 5 mins to sit down. Once seated I found myself surrounded by an angry mob of disgruntled youth who’s native tongue is complaining, insults, and collectively recalling and glorifying their past debauchery. One of the kids named luke (who complains literally at every single meal) got pissed off at another kid for complaining. In my frustration i said to luke, “really luke, your upset about Will complaining, you complain more than anyone at this table”. This of course did not go over well with him and he told me to shut the F up and blah blah blah, and next thing i know the whole table has united forces against me to verbally proclaim my treachery. (In hindsight i know that i shouldn’t have said that, but i was so tired of listening to everyone complain about everything all the time). The meal winds down and now its time to start cleaning up. I get some to clear the dishes, and sweep around the table but Pierre is supposed to be the one who wipes down the table and he is throwing another tantrum. I look around and luke is the first person i see from my table who is not doing anything so i ask him to wipe down our table, (would take all of 30 seconds). He says no, thats not my responsibility, so i ask him are you refusing to follow my directions? and he says yes, and i remind him that he will be loosing point not following directions. He gets escalated, starts yelling at me, cussing me out, then two other kids join in, then 3, then 4, next thing i know 5 kids have joined the cause and now im getting cussed out by 3 people at the same time. “THIS ISN’T FAIR… YOU CAN’T DO THIS…IT WASNT HIS RESPONSIBILITY, SO HE CAN’T LOOSE POINTS FOR NOT DOING IT…THIS IS BULLSH*T…F YOU MAN”. I mean honestly, if you had walked in without knowing the context you would have thought i had killed their cat or something. As all of this is going down pierre is having another meltdown and runs headfirst in the window trying to hurt himself. Thankfully glass is pretty strong and due to his polio he is not able to run very fast. After that debacle, i finally got to take a nap till our guys house meeting at 2:30. I slept for over an hour and felt more tired than i did before the nap. The nights activity was going to be awesome though, one of the kids parents had donated money so that we could take the entire guys house to a minor league hockey game. We were supposed to leave right after the guys got out of school. Once again Pierre was in a bad mood and so i starting talking to him and asking him what was going on. He said “you don’t know what im going through… you don’t know my past… i have been hearing voices telling me to kill myself”, after using some love and logic i started to pray for him and he started crying. He believes in the Lord and when he is not having one of his 5 meltdowns a day he is very thirsty for God and loves sharing and hearing Bible verses, and he loves listening to Natalie Grant. But as soon as he gets hungry or doesn’t get what he wants he blows up or melts down.

(Slight digression) on thursday we had chapel and we had of the direct care staff preach and he had an awesome message and asked anyone who wanted prayer/or to accept christ into their heart to come forward and about 7-8 girls and 4 guys went up and pierre was one of them. I say this both to rejoice and to preface how back and forth things with pierre are. In my opinion i think 1/3 of this issues are legit PTSD, reactive attachment related, 1/3 is spiritual warfare and the last third is him just being a punk.

anyway we left right after school to tale gate in the parking lot before the game and before we even leave i get cussed out by a kid in my car. As we start driving off property ryan continue to swear like a sailor and complain like a 2 year old so i slam on the breaks and ask him if he wants me to drop him back off at the house or if he’s ready to start acting like an adult. As we drove on i contemplated the definition of the word irony and how it would apply to Ryan if he didn’t get to watch the hockey game that his own father “anonymously” payed for.

only ten more days till i get to go home. Only one more normal week of coverage, and then most of the kids will go home for break. This week was trying, and this day i had to step back several times and ask for Gods provision to just make it through the next hour without exploding on a kid, or walking away, or crying. Please pray for strength and patience to make it through one more week.

I love you all,

Pic I took in the waiting room 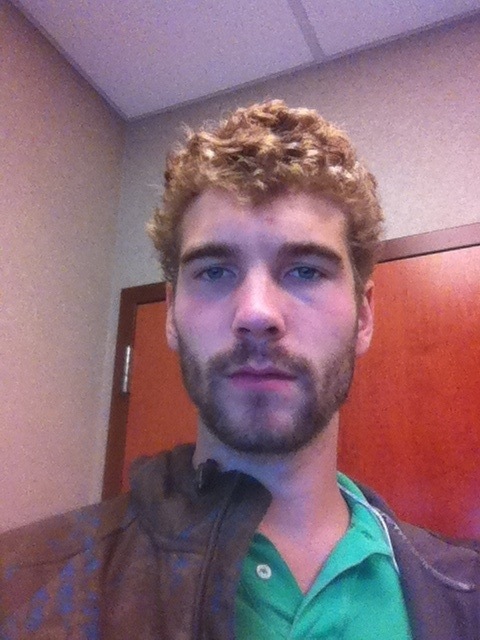 Pic at the hockey game. 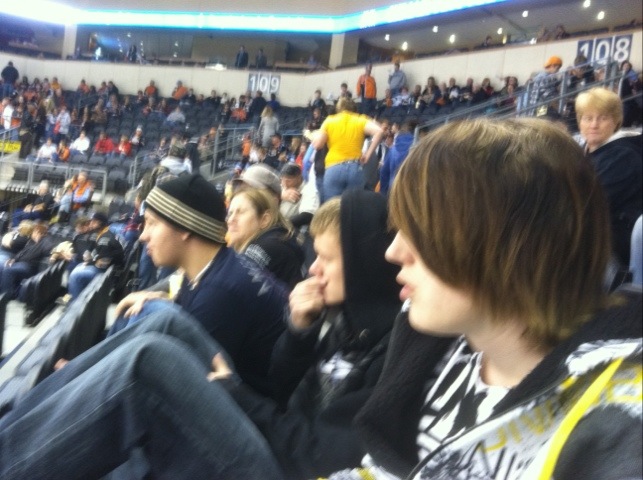